This is an especially boring advice post, even by my standards, but I’m putting it up in the hope it saves someone some trouble figuring out what they need to do in order to travel to Brazil – or, better yet, that it convinces someone that actually it’s not so hard to get the visa which would allow them to include Brazil on their South American tour after all.  Unfortunately, that means it’ll be largely useless and uninteresting to most people.  C’est la vie. 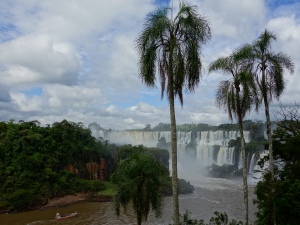 Another Iguazú Falls photo. Just because.

Brazil is one of only two countries on this entire round-the-world trip for which my passport has needed a visa stuck in it before I turned up to immigration.  Brazil doesn’t work that way for many passports – for example if I’d managed to get around to realising that I’m theoretically entitled to a New Zealand one many years ago, instead of, say, in the middle of last December, then I would never have needed to discover the information below, since I would have been waltzing across the border visa- (and fee-) free.

But for us Aussies, as for the Canadians and Yanks out there (and obviously some other countries as well), a pre-arranged visa is required.  This is slightly annoying, as a quick bout of Googling will reveal that Brazilian embassies around the world (much like their population in general) do not have a fantastic reputation for getting the necessaries done quick-smart.

My initial expectation was that I should try to organise the visa while back in Australia last December – but the timeframes didn’t really seem likely to work out given that I was already replacing my passport at the time, and given that Christmas holidays were involved.  I don’t know whether Brazilians are big on Christmas or not, but I kind of assume that the existence of any sort of holiday period is unlikely to encourage speed and diligence.

So instead I got my Brazilian visa in Argentina.  I expected that this would be easiest to do in Buenos Aires – the point of my bothering with this post, though, is that that expectation turned out to be wrong.  Much easier – at least in my case – to sort it out in Puerto Iguazú.

Apparently the Consulate-General in Buenos Aires is actually not bad for visa turnarounds:  two to four days, instead of the multiple weeks typical of embassies elsewhere in the world.  But as it happened, there was a public holiday in the way when we would be in Argentina’s capital, so I looked for other options.  Thus to the rescue the embassy in Puerto Iguazú, which turned out to be faster in any case, and also happens to have a reputation for involving a bit less hassle.

(If nothing else, getting a visa from Buenos Aires is more hassle because you have to have an appointment to go submit your documents.  There’s a nice handy online appointment tool to schedule this for you, thankfully, but it has a minor drawback:  it flat-out doesn’t work.  To get yourself an appointment, phone or email the Consulate-General.)

Obviously I’m not the authoritative source for what’s required when you apply for your visa – you can find what the Brazilian government says about the matter here.  But in addition to the filled-out and signed form, the 2”x2” passport photo, the proof of travel to/from Brazil (telling them I planned take a taxi or bus from Puerto Iguazú seemed sufficient for “proof of travel to” in my case), proof of a hotel/hostel reservation, bank statement from the last ninety days, photocopy of a credit card and fee in exact change, be aware that you will be required to provide a phone number at which you can theoretically be contacted while your visa is processed, or they will turn you away.  So I suggest you bring the phone number of your hotel or hostel’s front desk.

The Puerto Iguazú embassy is at Avenida Córdoba #264, and it opens at 8am in the morning each weekday.  Get in early – right when it opens, if not before, to get in line.  They only accept applications in the morning, apparently;  you can’t turn up even at 1pm to try to get yourself sorted out.  Once you drop off your application and passport, you’ll still have plenty of time to visit the Argentine side of the Falls for the day, before you enjoy a relaxed final evening in Argentina and then return to pick up your visa whenever you’re told to return (sometime the next morning).  Then cross the border, visit the Falls from the other side, and head on into Brazil.

The Iguazú Falls. Devil’s Throat on the left, Isla San Martin in the middle-right, and some other miscellaneous cascades on the right.

According to this perhaps disturbingly inevitable Wikipedia page, the Iguazú Falls are the third biggest non-submerged waterfall by mean annual flow rate.

(In case you, like me, are wondering “what the hell is a submerged waterfall anyway?!”, from what I can tell it means “it used to be a waterfall but then we built a lake over it, so actually it’s not in any way a waterfall any more, but I just want to put it on this here list of waterfalls on Wikipedia because it makes me feel clever”.  Mystery solved.)

More to the point, as far as lists people care about, there are three truly great waterfalls that seem to pop up on people’s lists of must-see sites around the world.  Niagara Falls, between Canada and the US (duh);  Iguazú Falls, between Brazil and Argentina;  and Victoria Falls, between Zimbabwe and Zambia.  Weird – it’d never occurred to me before that they’re all on country borders.  Guess the fact that they’re all necessarily on decent-sized rivers kind of makes that reasonably more likely.

Anyway, regardless of how the lists all stack up, you have to admit once you’re actually at Iguazú:  there is a serious amount of water tumbling over those cliffs, and it’s fascinating and worth the effort to go see.  Even if it is a slightly unfortunate poo-brown sort of colour.  (That, I’m assured, is entirely due to sediment and not do to any unsanitary conditions upstream.  Apparently a decade or so ago it was quite different, and the water quite clear and blue and pretty.) 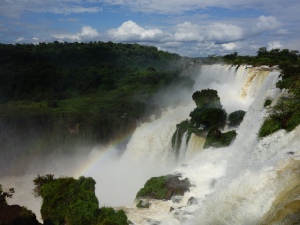 Quite a lot of water in this picture, no? Especially given that this picture doesn’t even include the main part of the falls – the Devil’s Throat.

So, a visit to Iguazú Falls is one of the staples of many a trip to South America, and we figured that as soon as we were done wandering around Patagonia, we’d head on up, on our way into Brazil.

And thus it was that we found ourselves spending a couple of days – one on each side of the border – wandering around the various vantage points to get a good thorough look at this truly stupendous barrage of falling water.  (Again we were incredibly lucky with the weather:  the two days that we visited the Falls were largely blue skies and sunshine, with just enough clouds to take the heat out and to make for some more interesting skies in our pretty photos.  The day in between – the day I picked up my visa and we crossed the border – it rained.)

There are lots of recommendations plastered all over the internet telling you which side you should see first, and how you should do this bit and then that bit and get the best photos from over there.  Personally, I don’t think it matters much.  We did the Argentinian side first because we were coming from Buenos Aires and heading into Brazil after – and also because it was while I was waiting for the local embassy to process my Brazilian visa.

The Brazilian side gets you a better overview of the Devil’s Throat – the biggest, most impressive part of the falls.  I guess if pressed I’d say the Brazilian side’s better, and if you’ve only got time to see one, see that one.  But the Brazilian side consists of only a single path running up to the Devil’s Throat, so you don’t get quite so much variety.  (And of course it’s that much more maddening because a single path is that much easier for the inconsiderate hoards of large – both as in numerous and as in obese – tourist groups to block!)  The Argentinian side lets you get up a lot closer, and has you wandering past a lot of the smaller cascades nearby where the river has split off to find a variety of different paths from top to bottom.

… of course, it’s difficult to get a good sense of that from photographs, because as you get anywhere near the Devil’s Throat there’s just too much spray to see clearly from a camera.

From both sides, though, you can see perhaps the Falls’ most impressive feature:  the incredible amount of spray it throws up.  And you can marvel at the pretty rainbows everywhere that the constant presence of temporarily airborne water droplets creates.

Both sides do boat trips to get you right up to the bottom of some of the cascades – we did the one from the Argentinian side, having heard it was a little better.  It was an entertaining ride, and you do get to see quite a different angle on the Falls from the water, but the point seemed more to get you as drenched as possible by the spray than to get the best view:  basically it consisted of the boat driver shoving the boat right up as close to the bottom of a couple of different falls as he could.  Gotta admit, the guy’s got a pretty fun job!

An overview of all of the Iguazú Falls from a helicopter. The Devil’s Throat is to the left, largely obscured by all the spray that it kicks up into the sky and into clouds. Yup, everything from the middle of the photo on over to the right is basically a pretty sideshow. Impressive, no?

The highlight of the whole experience, though, was the helicopter ride from the Brazilian side.  It was short – only around ten minutes – and expensive, at roughly a hundred US dollars each.  But it gives you by far the best vantage point of all to see the whole of the Falls at once.  And probably the most amazing aspect:  seeing how the spectacular mist cloud that the Devil’s Throat throws up into the air is actually a big enough generator of water droplets in the air that it powers a permanent cloud formation over the Falls.  We loved the whole experience, and so did the friendly American couple we’d met on the bus out to the Falls and convinced to join us for the ride.

Devil’s Throat as seen from a helicopter, generating its own clouds

Some other minor recommendations if you’re going:

A toucan in the Bird Park, looking remarkably like it just got out of bed and isn’t happy about it!

Hummingbirds in the Bird Park, feeding out of an artificial feeder. Surprisingly difficult to get a good photo of these little buggers!