You’ll all be very excited to discover that I haven’t actually dropped off the face of the world.  The last two months haven’t seen any updates here, obviously.  I guess it’s about time I came up with an excuse… 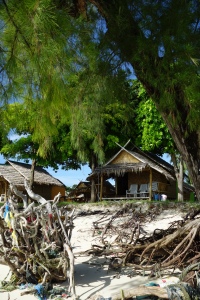 One of the places I’ve been spending my time over the last couple of months, too busy to communicate with you all: our beachfront bungalow for a week on Koh Lipe

You could call it a change of priorities, I suppose.  But really, basically, I’m going to blame the French.

You haven’t read anything about this here, yet, because I haven’t even got up to writing about Guatemala (yet).  But – sneak preview – that’s where, back in July, I met my now-girlfriend, Marion, a French fellow traveller wandering around Central and South America with a friend of hers.

The last post I put up here was in early September, a few days before my round-the-world trip with Chris came to its scheduled conclusion.  The end of that trip was a bit hectic, and from there, I was heading back to South-East Asia for some well-earned r & r time.  About that time, too, Marion and I had started thinking that maybe we’d like to see each other again sometime in the foreseeable future.  More specifically, we started thinking about interrupting her South America time so she could come visit me.  Buggered if I was changing my plans! 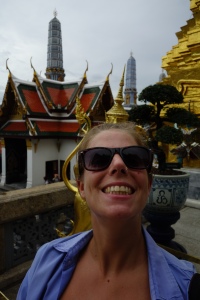 My second visit to the Grand Palace in Bangkok. Now with foreground!

Then I promptly spent some time ditching all those Myanmar plans (and I’d bought two guide books that I hadn’t read and everything!) and re-planning her trip to get her here three weeks earlier than we’d booked it, on a few days’ notice, really just on a whim.  And then, y’know, suddenly she was here.  Is here.  Has been for more than a month now…

So, right now we’re sitting around having a rest day on the internets in Chiang Mai.  And in the intervening time I think I’ve opened up a draft for a blog post on maybe one other occasion.

Like I said:  a change in priorities.  For the couple of months during which we’re located in the same hemisphere as one another, my time is pretty much all spoken for.  Any leftover moments tend to be spent drilling some basic French into my brain, rather than tapping away here.  (Est-ce que vous pourriez parler plus lentement, s’il vous plait?)

And that’ll almost certainly continue for the next few weeks, I’m afraid.  If you’re very well-behaved, you might just get another post or two in early December.  But don’t hold your breath.  Seriously, we wouldn’t want you all going purple.  Especially not just before Christmas.  It’s really not a good Christmas-y colour.

Sunset from the nearest beach to our hostel on Koh Lanta