This is going to be one of the shortest posts I’ve ever bothered with here, I think.  Because I don’t really know what to tell you about Florianópolis.

I hardly took any photos.  In fact, much of my time was spent not even having left our fantastic hostel.  Over five days, I went for one run on the beach, one post-midnight swim, and one hike over the hill to a beach on the other side.  (That last was actually a bit of an adventure, involving a couple of hours of bare-foot trekking over what’s perhaps most generously described as a ‘nature trail’.  Slash stream, given the deluge that commenced its descent from the skies about twenty minutes in.  But still, entertaining as that experience was, our stay on Florianópolis overall was substantially less than my usual levels of out-and-about activity.)

The view I spent most of my days in Florianópolis in front of: from the deck/bar of our hostel

I spent most of the rest of the days on the deck-by-day, bar-by-night in the hostel overlooking the sea and beach, in front of either a Kindle or a laptop.  And pretty much all the evenings in that same bar chatting away and enjoying the reasonably priced beers and daily free caipirinhas.

It was relaxing.  (Although not in the sense of managing to get anywhere near adequate levels of sleep:  somehow those beers and caipirinhas always managed to extend fairly late in the evening, followed by more hanging around chatting, or heading down to the beach, when the bar closed.  And waking with the natural light in the rooms not long after sunrise each morning meant that the week, while enjoyable, was also somewhat sleep-deprived.)

There’s a lot going for Florianópolis, most of which I didn’t experience.  But the point of the place is to have a holiday.  And I’m perfectly happy with having achieved that, even if I did it in a way that makes for the most boring reading possible in a blog post.  Although in fairness, as far as contributions to this blog go, Florianópolis is actually way up there:  most of what you read about Myanmar, Thailand, Chile and Perú back in April and May was typed up over a few days of enjoyably productive writing from that very same hostel deck.  So I guess you’ll have to take the ups with the downs, and hopefully you enjoyed some of those posts even if there’s not much to enjoy in this one. 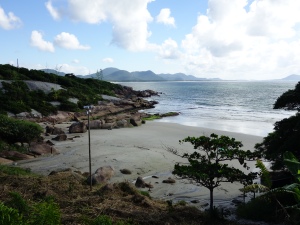 The little beach nearest our hostel, complete with spotlight to light it up at night – well, except that one night when the power went out – giving the night owls somewhere to go once the bar’s closed