Arriving from La Paz into Argentina, we spent all of one night in Buenos Aires before catching an overnight flight down to Rio Gallegos, way down south.  I say ‘overnight’, but actually we arrived by 1.50am, and most of the night was in fact spent waiting, reading, napping, waiting and reading in the airport (we figured it was likely to be slightly nicer there than the bus station).  Eventually the sun came up and we headed off and get on a bus to our actual destination, El Calafate.

Argentina is richer than Bolivia.  Hell, most countries are richer than Bolivia.  El Calafate, in Patagonia, is better off than your average Argentinian town, too.  The contrast with Bolivia was, well, stark.  The bus that got us there was capable of speeds over 60km/h, for a start, and not only that but the roads were good enough to mean that that wouldn’t be an “adventure”.  And we didn’t even have to worry about whether our driver was about to fall off the road.

Where Bolivia had me thinking back to our time in the poorer parts of South-East Asia, El Calafate – which is very much a tourist town, its one real claim to fame being the beautiful Perito Moreno Glacier – reminded me of the South Island of New Zealand:  it’s basically half Wanaka, half Queenstown.  But with Argentine steakhouses galore.

As nice as it is, as I say, El Calafate is kind of a one-horse town.  The Perito Moreno Glacier is somewhat world-famous (as far as glaciers go, anyway), and that’s what everyone comes to see.  It’s slightly hard to explain exactly why it’s famous, to be perfectly honest:  I gather it’s a combination of things.  First, for a giant hunk of ice, it’s remarkably easy for tourists to get to:  you just bus out of town, without having to hike your way through snow fields or anything like that.  You don’t even have to climb up anywhere:  it’s only about 250m above sea level.  Second, like many glaciers, its face forms the edge of a lake (Lago Argentino) – but in a stroke of good luck, the part of the lake it abuts is close enough to the other side for a fantastic view from the shore just at the end of your one-hour bus trip out from town.  Third, it’s one of the few glaciers in the world that’s not receding – it’s in equilibrium, staying roughly put from one year to the next.  Fourth, although it’s in equilibrium, that’s not to say that the ice doesn’t move:  it does, and fast.  About 2m per day in the middle.  So there’s plenty of ice heading on down the valley to then melt or fall off into the lake. 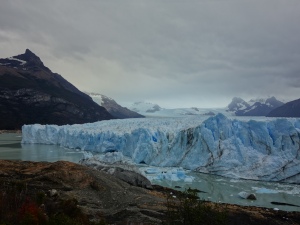 The face of Perito Moreno Glacier, forming a narrow channel between the glacier and the land edge of Lake Argentina

Which brings us to the most special thing about the glacier:  the spectacular calving off of giant chunks of ice at its face.  The fact that it’s so close to the opposite shore of the lake means that every so often, it actually makes it across to the other side and forms a natural frozen dam, blocking off the lake’s access to the Santa Cruz River.  When this happens, the lake rises (up to 30m, apparently!) and the pressure slowly erodes away the glacier, leading eventually to a massive crash as it gives way.  Ice and water go everywhere, in a grand cacophony of H2O.  Apparently it’s quite the event.  Perito Moreno would probably be a famous tourist attraction anyway, but this much-anticipated natural extravaganza brings TV crews and spectators from all over, ensuring real worldwide fame every time it happens.

Anyway, we didn’t see any of that – there’s no ice bridge at the moment;  the last one crashed into oblivion early last year.  Nor did the glacier oblige us with one of its more frequent and regular calvings-off of big hunks of the ice face (the last one of them had happened about eight weeks ago, we were told).  So we simply had to admire the largely static face of the ice, and the creakings and groanings that promised that things were still progressing inside, even if they weren’t to come to a head during our visit.  We did hear and see a couple of ice blocks fall, and saw the power of the waves they created, so I guess we could get by with just imagining the rest.  And admiring the ice wasn’t exactly difficult in any case:  it makes for a pretty spectacular vista, even when it’s not doing anything exciting.

From there, it was over to the glacier itself:  we’d booked a ‘Big Ice’ trek, which meant we wandered up the side of the valley a bit, donned crampons, and trekked out over the ice into the middle of the glacier for a few hours.  This was a cool excursion.  We wandered along the ridges, admiring the variety of terrain around us:  the lagoons (all of which were a particularly beautiful blue), the crevasses (some of them tens of metres deep, others shallow but growing;  some of them full of water, some of them just hollow and begging to have rocks thrown down them to test their depth), the streams, the caves, etc.

The fact of walking in crampons was entertaining – even if one of mine broke on the way back and had to be repaired, once I’d half-hopped, half-slid my way along to catch back up to the group first.  It was easier than I’d expected (and I presume the same was true for most:  I overheard a few people asking before they booked the same trek whether the guides thought they’d physically be able to cope OK).  So I guess that’s one more experience I can tick off the list as having achieved on this trip:  trekking across a glacier in crampons.

At the end of the day, though, all you’re doing is walking across ice, and so once we’d got used to the crampons it became just another wander around a picturesque locale in search of pretty views and good photos.

Perito Moreno Glacier up close, just before the beginning of our trek across the ice. Note the cool blue-ish tinge to a lot of the ice.

And once we’d done that, it was back to the bus, back to the hostel, and a second shot at the all-you-can-eat meatfest of a BBQ that our accommodation put on for Ar$100 per person.  Mmmm, food…

We were in El Calafate for two full days, not including the somewhat written-off first day in after our stupid-early morning flight into Río Gallegos.  So having glaciered on the first day, we struck around for things to occupy the second.

There’s a decent-looking hill nearby town, and it seemed like it’d have good views.  And on our first night in town, we’d run into a group who’d climbed it and confirmed its suitability for scenery-admiration purposes.  So we thought we’d do that.

The hill we climbed next to town. We climbed up the side that’s facing towards the left of the photo. Looks nice and gentle at the bottom, no? Yeah, about that… You want to go with the side right over to the right of the photo.

We queried our new friends for more detailed information on how to get up there, and utterly failed to follow their advice.  Result being that instead of a slightly-difficult climb with some scrappy bits, we spent two and a half hours scrabbling up a substantially more vertical than necessary hillside.  After a good fistful of effort, a hearty pinch of whingeing about the wind, and only a very restrained dabble of swearing, we made it to the top.  At which point we let loose with some more whingeing about the wind.  Because by jeebus was there a whole lot of air buffeting its way over that ridge.  Enough to nearly blow you sideways, if you weren’t paying careful attention.  I was grateful that it at least had the courtesy to be blowing you away from the edge.

We admired the scenery:  you can get a great view of the lake and the town from up there, although admittedly neither is particularly featureful.  And then we scouted about for a way down that looked less shit than the way up.

El Calafate, seen from the top of the somewhat arduously-climbed hill next to town

Eventually we found one, and we powered on down the hill, slapping ourselves on the back and noting condescendingly how easy it would all have been had we only come up this way.  And six hours or so after we’d set off, we returned to the hostel, heading for the beer fridge, and congratulated ourselves on an effort well expended, if not well planned.

Then, next day, to El Chaltén, where hopefully we would have the sense to follow the established trails rather than walk straight up the bloody side of shit.