tl;dr:  We spent twelve days in the Galápagos for less than $US2000 per person including flights from mainland Ecuador – and about a quarter of that was my prodigious eating efforts, so you can definitely do it cheaper, especially if you’re not a glutton.  It’s not spare change, obviously, but it’s not as prohibitively expensive as you might guess.  And it’s worth every cent.

This one’s a nuts and bolts post for those of you potentially planning a trip to the Galápagos – now or sometime in the future;  if that’s not you, you might want to skip it.  It’s not exactly intriguing, and it’s not even funny, I’m afraid…  If you haven’t seen them, you might want to have a look at my posts about actually being in the Galápagos, instead:  one, two and three.  (If you haven’t read them yet, hopefully those posts might help you decide that yes, you do definitely want to plan a trip there, too.  Then you can come back and figure out how.)

So, if you are even vaguely interested in travelling to the Galápagos – even if you think it’s out of reach – then you might be titillated to discover that it’s possible on a more limited budget than you might expect.  It turns out that, while definitely awesome and impressive, the Galápagos doesn’t actually exist in a fairyland bubble of expensive perfection, and is just another destination much like many others.  One which can be travelled in all sorts of different ways, on all sorts of budgets.

To cruise, or not to cruise?

On the advice front, your biggest decision is whether to DIY like we did – staying in accommodation on the islands, in Puerto Ayora (on Santa Cruz), Puerto Villamil (on Isabela) and Puerto Baquerizo Moreno (on San Cristóbal), and basing your activities from there, organising individual day trips and activities through agents and dive/snorkel shops on the islands – or to book yourself on a three-, five-, eight- or sixteen-day cruise.  (Or obviously you can also do some combination of the two, if you’ve got the time.) 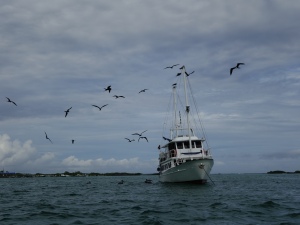 The cruises are typically the more expensive way to do it, but not necessarily by a tonne, if you can get a good deal.  We ran into one guy who’d bought himself a spot on an upcoming eight-day cruise for $1300 – that was booked a few days in advance, while already in the Galápagos (so bear in mind that it didn’t include his flight costs).  Walking past travel agents in Puerto Ayora, we saw other signs promoting five-day cruises from as little as $550 (in the cheapest class, up to around $1100 for the luxury class).  Booking on the internet before getting here, or through a travel agent in your home country or in Quito, you could expect to pay twice those prices:  the last minute deals on the islands are definitely much cheaper.  That said, I’m told the best cruises all sell out months in advance, so the last minute option won’t actually be available for them anyway.  You can easily spend up to $5000 for good, luxury eight-day cruise booked well in advance before it sells out.  Expect the price tag for the good sixteen-day cruises to have five digits.

For the extra money you pay on a cruise, you get:

Having said that, if you’re on a cruise and it’s not a dive cruise, then you won’t be able to decide that you’d like to go scuba diving tomorrow, please.  Nor will you be able to plan the last few days of your trip specifically to maximise your chances of seeing the things that you happen not to have encountered in the earlier part of your trip.  That sort of thing may or may not matter to you – we were quite glad, for example, that we could decide in the last few days to snorkel on Santa Cruz in areas where there were likely to be marine iguanas actually swimming in the water, since we hadn’t seen any of them leave the land yet by day ten.

Here were the things we would have liked to do while we were in the islands but didn’t – these are things that potentially doing organised cruises of one form or another might have helped us tick off:

It’s a bit hard to find an appropriate photo to represent the things we didn’t see, so here’s a random seascape, taken as we returned from Los Tuneles on Isabela

But then, here are the things we wanted to do that we did: 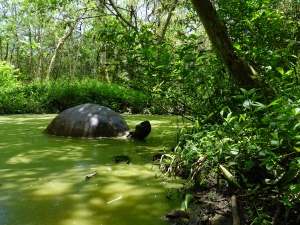 A giant tortoise in swampy water in Rancho Primicias, in the highlands of Santa Cruz

So, y’know, I feel like we achieved a bit during our visit.  It felt worthwhile – especially for what we spent… 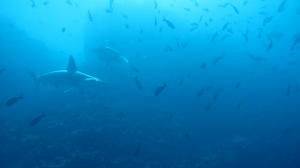 For what it’s worth, if (when) I go back to the Galápagos, I think I’ll do a cruise – but largely that’s because it makes sense to do something different the second time around.  If I were doing it all over again for the first time, I’d probably do exactly the same again:  island-hopping and day trips.  So my advice for you if you haven’t been yet:  island-hop, like we did.

All costs in $US, per person (I was travelling with Chris, so we were two people – maybe budget a little more on accommodation if you’re going solo, since a single room will probably be more than half a twin, and you might not be able to find hostel dorms all the time)

I didn’t keep exact track of what I spent on food and drinks, because, well, that seemed like a lot of boring effort for not a whole lot of return.  Also I was busy eating and ordering more tasty tasty food, not writing stuff down in a notebook.  But I know the price we paid for everything else, so…

A gecko on the screen of an ATM on Santa Cruz 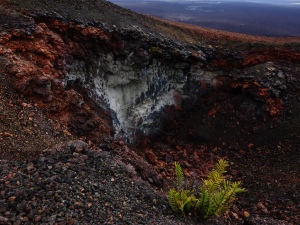 A sight from one of our day trips: a fern manages to prosper in the volcanic dirt and rock of Volcán Chico, on Isabela

While I decided against the monetary equivalent of calorie counting, I can tell you roughly what prices we encountered…

Based on how much cash I brought with me, how much I took out from the ATMs in the Galápagos, and how much I had left when I flew out, my best guess is that I spent around $500 on food and drinks over the twelve/thirteen days on the islands, so around $45 per day.  But I eat a lot (most times we went for breakfast, I’d order two of them, for example), and we certainly weren’t being careful to eat cheaply.  Most people (ie normal people) would spend a lot less than that, and it’s certainly easily possible to eat for $20 a day or less if you want to – especially if you cook for yourselves, obviously (our rooms on Puerto Ayora and on San Cristóbal both had cooking facilities that we were too lazy to bother using). 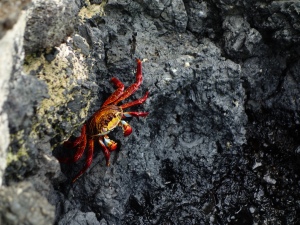 Miscellaneous other photo: a crab on volcanic rock on the shore, on Isabela somewhere

And let’s finish on a positive note – here’s how we can be confident that the Galápagos Islands will still have a giant tortoise population for many generations to come. Good work, boys and girls, good work.

Any questions?  Ask me in the comments below, and I’ll do my best to give you a useful answer!