This is part two of a series of posts about our time in the Galápagos Islands.  If you haven’t seen it yet, here’s part one.

Sea lions happily occupying the park benches in the rotunda next to the pier. Silly humans, you thought these were for you, didn’t you!

It has some other notable features:  it’s home to one of the Galápagos’s two airports;  it’s where Charles Darwin first set foot on the islands;  and Puerto Baquerizo Moreno, its town, is the capital of the Galápagos Province of Ecuador.

But when you arrive at the port in the afternoon on a boat transfer from Puerto Ayora, it’s the sea lions that you’ll notice.  Everywhere. 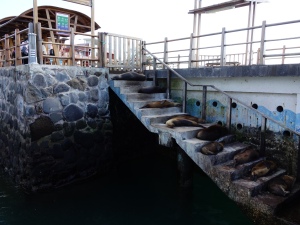 Sea lions lined up sleeping on the steps at the pier

One of the more amusing scenes from our time in every botanist’s favourite archipelago was just after we arrived in Puerto Baquerizo Moreno.  As we took a short wander around the port and harbour area, looking over the fishing and tourist boats, I spotted a sea lion swim up to and flop over the gunwale of a currently crewless small fishing charter, plonk itself about through the boat a little poking its nose here and there (presumably looking for fish), and then give up and abandon ship.  Then it popped up on the boat next door to repeat the process, and then again, before giving up for good and flitting off out of the harbour entirely.

Clearly the sea lions are not particularly intimidated by the presence of humans and their various effects.

Sea lions playing and resting at the pier

Of course, there’s other wildlife on San Cristóbal, too.  A hike out past La Lobería (a sea lion colony) will take you to a point where you’ll find a reasonable inhabitation of all kinds of birds – especially frigatebirds, blue-footed boobies and red-footed <something not as funny as ‘boobies’>.

A soaring frigatebird against a featureful sky

I can only presume that they were able to edge out the sea lions because their stretch of shoreline is a nice sheer cliff. 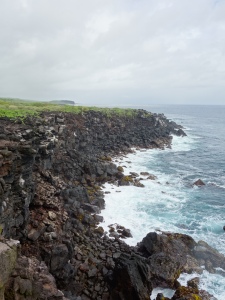 Pretty coastline on San Cristóbal, hiking out past La Lobería

In the process, the hike out to the birds will of course take you past a small colony of sea lions.  Hence the name ‘La Lobería’:  sea lions are ‘lobos marinos’ in Español.  It will also get you absolutely drenched, if you pick a nice rainy afternoon like we did.  Oh well.  What else were we going to do?  Stay inside?!

A frigatebird flies above the coastline of San Cristóbal

But that birdwatching expedition was really the only other wildlife-spotting we did from Puerto Baquerizo Moreno, in truth.  And actually, the sameness of all the various different locations in which to see sea lions made San Cristóbal probably a little less exciting than the other two islands we visited, at least in my eyes.  (Of course, my saying that is kind of like asking someone who grew up in the sixties who’s their least favourite Beatle – all of the islands were great.)

Sea lions on the beach in the early morning

But that said, San Cristóbal was also the first time we went diving in the Galápagos, so really I’m cheating by not yet having mentioned the off-island underwater stuff we got up to.

We hadn’t actually really expected to do any diving in the Galápagos.  Yes, the islands are famous for having some of the world’s most awesome scuba destinations.  But the best ones – Darwin and Wolf – are way off in the north of the archipelago, and only accessible on a week-long dive cruise.  So we’d kind of assumed that we’d just be snorkelling around when we wanted to check out what the sea might have to offer.

Wandering around town comparing prices of various day trip options, though, we found that there were plenty of dive shops offering trips which you could either snorkel or dive – and the diving was not much pricier ($140 for a two-dive trip versus $70 for snorkelling).  Combine that with reports that in recent days, divers had been consistently spotting hammerhead sharks at a couple of the sites (snorkelers too, to be sure, but if you’re going to see them, wouldn’t it be so much better to be down there with them?!), and we ended up pulling out our PADI licences and dive logs after all, for a trip out to Kicker Rock. 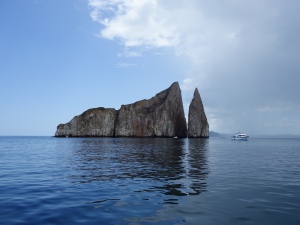 And we were glad we did!

In fairness, the day started off with some great snorkelling, not diving:  they take you first to Isla Lobos to do a pre-dive “equipment and buoyancy check” (in quotes because I’m sure as much as anything they’re checking that you can complete a very basic dive as much as that your buoyancy is right and that your equipment functions to spec).  That done, and weight belt and BCD unceremoniously dumped back on the boat, we kept the mask and snorkel on and paddled about for a while.  Pretty much straight off the bat we came across a sting ray which we proceeded to stalk around the area for a while (at a safe distance, obviously – just because I’m Australian doesn’t mean I’m looking to Steve Irwin myself).  But that wasn’t the entertaining bit:  the entertaining bit was the very thing I was claiming to be bored of above – the sea lions.

They may be a little lacklustre and tedious on the shore, having a nap.  But in the water, they’re something else:  the most playful – and agile – creatures you could imagine.  Snorkelling with them is somehow inspiring, as they zip around you, swimming in circles, doing loop the loops, alternately playing with you and with their own friends.  Twisting and turning, swimming upside down, playing chicken as they dart at your face and then flick off elsewhere and then return.

A sea lion underwater. (Photo is actually from one of our dives, and is courtesy of Planet Ocean dive shop. Thanks to the dive guides for taking photos and giving them to us – but please direct all complaints re the photo being out of focus elsewhere!)

And that was all before the diving started.

We didn’t actually spot any hammerheads, in the end.  (Although our dive guide claims that there was one on our first dive that none of us saw because we didn’t follow him closely enough so weren’t around when it turned up.  So stay closer next time, OK?)  Still, there were black-tipped Galápagos sharks on both dives, as well as white-tipped ones on our second dive, so weren’t entirely sharkless.  And there were plenty of fish, some in large schools which we could swim right through without much disturbing – loads of fun.

And, on the second dive, another sea lion.  One which absolutely flew past only a couple of metres away as we were swimmingly calmly along about 20m underwater, casting its beady eye over us but apparently not giving us a second thought. 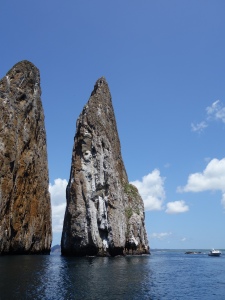 The channel between the rocks of Kicker Rock

After the second dive, we said goodbye to Kicker Rock, and it was back to a nice sandy beach on San Cristóbal for some more snorkelling and general dicking about.  Which, given how much fun it was, for Chris and me meant playing with more sea lions.  This time there were some young ’uns to frolick with (cautiously, obviously, making sure not to agitate their nearby parents any, since an underwater fight with an over-protective mummy sea lion is not one I’m likely to come out on the winning side of).  So we spent our time mimicking the pups, discovering that if you twist and turn and barrel-roll underwater like they do, they respond in kind and become even more fun to be around.

All up, the day certainly had us appreciating the little guys’ inquisitive manner.  And even if it was the only thing of note we did on San Cristóbal, it was still definitely enough to be glad we went.