This is part three of a series of posts about our time in the Galápagos Islands.  If you haven’t seen them yet, here are the posts describing our time on Isabela and San Cristóbal.

If San Cristóbal was about sea lions, then Santa Cruz was about tortoises.

A giant tortoise strikes a pose, at the Charles Darwin Research Centre in Puerto Ayora

Turning up to Puerto Ayora on Santa Cruz, to experience our final island in our twelve-day Galápagos adventure, the place actually felt fairly familiar.  Although the first two posts in this series were about Isabela and San Cristóbal, that’s because I’m slightly cheating for greater blogging convenience:  by now we’d actually spent a bit of time in Puerto Ayora already.  Our first day and a half was spent there after we flew in, and we’d used some of that to visit the tortoises in the Charles Darwin Research Centre, even though I’m only getting around to telling you about that below.  And adding to the familiarity, we’d had a good few hours layover in Puerto Ayora (spent in cafés, of course) while getting from Isabela to San Cristóbal, since there aren’t any direct boat transfers.

So it felt pretty much like coming back to our Galápagos home – almost literally, gladly staying again at the aptly-named, very friendly and comfortable Galápagos Best Home Stay.  And we arrived with more than a little relief, given that our transfer from San Cristóbal had been a tad more eventful than would have been ideal:  our original boat died about twenty minutes into the theoretically two-hour journey, and we’d had to limp back to port at San Cristóbal and switch over to another, slower and less comfortable, boat.  (But one which was taking on less water…)

Still, we got there, and this time, no one was even seasick – in contrast to our previous two early morning boat transfers, each of which had concluded, for at least a couple of other passengers, that eating breakfast just before a boat trip is not the best idea.  (Thankfully seasickness is not a problem for me or Chris.  I spent the whole trip with my head down staring at my phone, watching DVD rips of a BBC Galápagos documentary that my parents had given me for Christmas.)

And the fact that we had been here before meant that we already knew exactly where to go for a late breakfast – the excellent Il Giardino.  Off to a good start.

But speaking of starts, I said Santa Cruz was about tortoises, and really, instead of rambling about transfers and breakfasts, I should actually begin with the first point of interest in Puerto Ayora, which, as I say, we’d actually been through on day two:  the Charles Darwin Research Centre, and more specifically its giant tortoise sanctuary and breeding program… 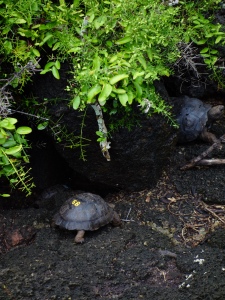 Baby tortoises in the breeding program at the Charles Darwin Research Centre in Puerto Ayora. I can only assume that the numbers painted onto the shell of each baby tortoise are in order to facility juvenile tortoise-racing. Go number 58, go!

Unfortunately we were about eight months too late for the Centre’s most famous attraction:  Lonesome George, last of his particular species, had died in June 2012.  (There are many different species of Galápagos giant tortoises – pretty much one per island.  This is why they were – in fact, are – so important to Darwin’s theory of evolution by natural selection:  the tortoises on each island have evolved noticeably differently in response to the unique environment of their respective particular homelands.)

Instead we had Super Diego – the tortoise equivalent of Hugh Hefner, sans prophylactics, named for the San Diego zoo from which he was repatriated in order to assist – heroically, as it turns out – in the repopulation of his species.  For slow-moving, apparently lazy animals, giant tortoises sure do seem to get about a lot.  Super Diego himself has literally over a thousand children.  This despite his apparent confusion as to how the process of acquiring said children works:  as we passed the area in which he and his veritable harem live, he was doing his very darndest to impregnate completely the wrong end of one of his unfortunate companions.

He wasn’t the only randy reptile, though:  the tortoise sanctuary we visited on Isabela featured similarly, err, active examples – although at least those ones were proceeding in a manner more amenable to actual procreative success. 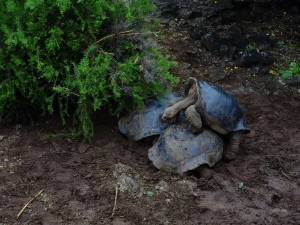 Super Diego: A+ for effort, I suppose. It’s not particularly obvious in this photo, but his partner in crime is facing away from the photographer. I.e. not in a position which allows Super Diego to achieve his stated goals.

The Charles Darwin Research Centre isn’t entirely about tortoises, it has to be said.  There are also land iguanas – and this was actually the only place we saw them, despite seeing their marine cousins pretty much covering the ground in many other a location.

But when it comes to it, land iguanas are much less cool than giant tortoises.  So really, let’s move on.

Actually, our “moving on” didn’t involve giant tortoises either – nor any other form of local wildlife, except the human kind.  When we got back to Santa Cruz after the two other islands, we had a spare afternoon to kill, and so lazily headed out to Las Grietas, a sort of canyon thing filled half full with water (it’s apparently connected to the sea, although despite our best efforts it wasn’t really possible to follow it right out to shore – too much fallen rock in the way).  It’s where the local kids like to go dick about cliff-jumping and just swimming around to escape the heat of the midday sun.

Chris prepares for a graceful swandive at Las Grietas

So we had a nice relaxing afternoon swimming about in some nice clear calm water, seeing what there was to see.  (Which was not much, but hey – it was nice.)

Anyway, what else was there to do, now that we were back on our final island…

Having missed out on seeing any hammerhead sharks on our dives at Kicker Rock near San Cristóbal, we figured that, well, we might as well try again.  Especially since the dives were not too expensive.  So we headed out to what the consensus seemed to rate as the best dive trip available from Santa Cruz:  Gordon Rocks.

And this time, we got hammerheads.

A hammerhead shark (The photos taken during our dives were generously taken and given to us by our dive guides from Eagleray Dives – thanks, guys!)

In fact, we saw a whole school of them – somewhere between twenty and thirty, we think.  All of ten to fifteen metres away.  And we hardly even had to look:  they swam past shortly after we got into the water for our first dive!

Also there were sea turtles and other sharks … 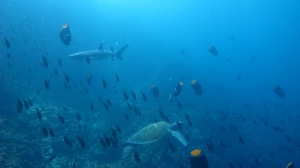 … and more hammerheads, some off by themselves …

A sting ray, up close and personal (photo courtesy of Eagleray Dives)

… and playful sea lions – even moreso than they had been at Kicker Rock, since these ones actually hung around and played with each other and with us as we were diving … 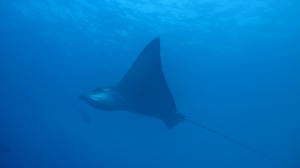 … including a whole school of them swimming about in formation … 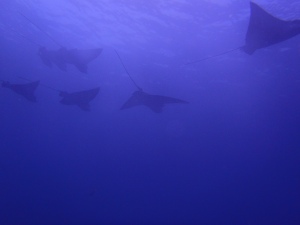 A garden eel – Chris and I didn’t actually see one of these, because we were snorkelling along chasing hammerheads instead of doing the third dive. But hey, this is the sort of shit you can see… (photo courtesy of Eagleray Dives)

Put all that together and the dives were amazing – far and away the best diving I’ve ever done, certainly!

And to be honest, I think we made the right call.  While the dive group had a good dive and saw a few cool things – more stonefish, and a garden eel – we spent our time chasing after the school of hammerheads.  And found them!  More than once, in fact.  So we were able to see them again, gracefully swimming past (them, not us – we weren’t graceful at all, we were trying desperately to keep up!) – this time from above.

Without wanting to sound all wilty-at-the-knees, it was a pretty magical day in the water. 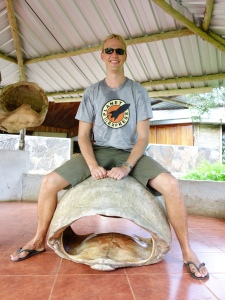 Riding a tortoise (shell) at Rancho Primicias. Apparently sitting on a shell is hard work, because I appear to be covered in sweat. Ewww.

But as exciting as all that diving stuff was, I did say before that Santa Cruz was all about tortoises.  So I feel obliged to revisit that aspect.  The day after our dive, we headed on up inland, to Rancho Primicias, an in-the-wild tortoise sanctuary, where we could wander about amongst the trees and streams and grasses in search of tortoises.  (Not that the searching was difficult:  they leave huge trails of flattened grass and undergrowth behind as they move around.  This is how pirates used to find them a hundred or so odd years ago, when they were searching out tortoises as a source of meat that could be kept alive in their holds – despite not being fed or watered – on long sea journeys.)

A truly giant giant tortoise at Rancho Primicias on Santa Cruz. This guy weighs in 270kg and is 180 years old. He likes piña coladas and walks in the rain. His passions include eating and farting. No, seriously, he absolutely dropped his guts as we were standing around taking photographs. Like, thunderously. If we’d been less mature about it, we would have absolutely pissed ourselves laughing. We totally didn’t though. It was really inappropriate of him, and quite frankly I think we can all agree that he should know better. Dirty old bastard. No manners. Not funny at all.

So, after we’d seen the tortoises, what else was there left to do?

Well, for starters, there was Tortuga Bay.  It doesn’t have tortoises (well, not that we saw), but at least it’s named after them, so I can feel good about keeping my overall theme going here.  (How about that, mister middle-school English teacher?!)

What it does have, though, is an absolutely beautiful beach.

And, we were told, some quite reasonable snorkelling in nearby Finch Bay.  That sounded great to us, because one of the few remaining things on our to-do list was to try to find a marine iguana actually in the water, swimming around.  So we grabbed our snorkelling gear and headed off in search of one.

And, wouldn’t you know it:  success! 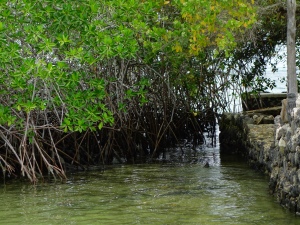 Finally, a marine iguana (bottom right) actually being all marine and swimming in the water!

So we quickly ticked that off our list.  (Actually, not so quickly:  we had a great time swimming around, chasing iguanas and finding sting rays in the bay – it was a beautiful day, again, and damned if we were going to waste it just because we’d found our objective early on in the piece!)  And then we proceeded along the beach, around Tortuga Bay – where we discovered that just beyond the end of the beach, there’s another, more protected inlet, with yet another stunning beach.  Fantastic.

On the beach in the little inlet just beyond Tortuga Bay

It would be a lie to say we were running out of things to do with our time in the Galápagos.  Had we had three times our twelve days, we would easily have found plenty to keep us occupied, and probably still wanted more time before leaving.  But at the end of our time in Puerto Ayora, once we’d finally managed to find those marine iguanas actually in the water, we were nonetheless satisfied and, I suppose, as ready as we were going to be to leave.

We’d been lucky enough to see pretty much everything we’d ever hoped to, and we’d had a stunning, amazing time while we did it.  Everything else can wait until next time.