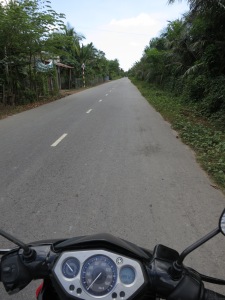 Scootering into the Mekong Delta from Ho Chi Minh City

Observant (or perhaps I should just say ‘persistent’) readers may recall that a while ago, I made fun of the traffic situation in Vietnam.  As you may have noticed from my other blog posts about our time in Vietnam, and in fact from Thailand as well, we actually spent quite a bit of our time riding around on scooters.  So I guess you can conclude from that combination one of two things.  Either (a) we’re just crazy and were happily exposing ourselves to risks we were lucky to survive, or (b) it’s actually not all that bad.  I’ll leave the choice up to you.  Arguing in favour of (a) there’s certainly the fact that as you wander around South-East Asia, you see a lot of blank-faced looking tourists sporting road rash or other evidence of recent scooter-related injuries.  On the other hand, in favour of (b), we didn’t have any problems at all…

Anyway, the decision of whether to scooter or not to scooter is entirely up to you.  All I’ll say is that if you’re game for it, it’s an incredible way to experience the area – and you can go a lot of places you otherwise wouldn’t, as well as going places you otherwise would, but under better circumstances (directly, at your own pace, and without with a whole other busload of people).

If you do decide to scooter around, here’s a random assortment of advice:

Hope that helps.  Any other advice welcome in the comments below.