At least if you judge by the slogans on tourist t-shirts for sale in the city itself, the most important characteristic of the northern Thai city of Pai is the number of bends on the road between it and Chiang Mai.  (There’s lots – 762, apparently.) 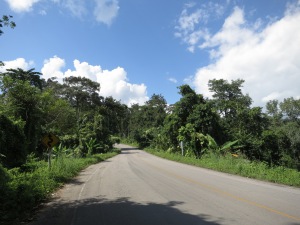 On the road from Chiang Mai to Pai

I wouldn’t know, though, because we didn’t take the van option.  Nor did we go with the public bus (which is slower, but I gather is recommended for those who aren’t sure if they’d appreciate the speeding van).  We, obviously, hired some scooters for a few days from Chiang Mai, and made our own way.

It’s a pity that the majority of travellers experience the journey more via the twists and turns of their stomachs than as a picture nicely framed by the brim of yet another largely useless scooter helmet.  Because it’s a very very pretty ride.  And while the road may be crap, it’s perfectly fine if you slow down and avoid the more egregious of the many potholes.  (Well, ‘potholes’ is somewhat of an understatement for some of them.  There are admittedly a number of occasions when they’re more hole than road.) 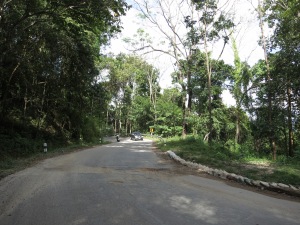 A section of road possibly in slight need of repair, on the road from Chiang Mai to Pai

And as an added bonus, when in control of your own itinerary, you can easily stop to take advantage of the many coffee shops along the way – in particular, there’s a place called ‘We 2 Coffee’ at about the halfway mark that does a very nice coffee indeed, and some excellent, wonderfully spicy lunch, to boot.

Putting aside the actual mode of transport to get there, Pai was quite a nice destination, too.

It’s a small place, and very tourist-focussed.  But there are some quite beautiful sights to be seen nearby.  And it’s relaxed.  Hell, I don’t think it could be more relaxed without being actually perched on a couch in front of a TV watching bad eighties movies.  Which would be a difficult thing for a town to be, you have to admit. 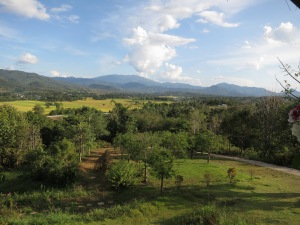 A view out over the plains near Pai, from the coffee shop at the Pai viewpoint

In addition to the prettiness of the countryside itself, there’s Pembok Waterfall – a nice little secluded cascade well worth the short trip out of town. 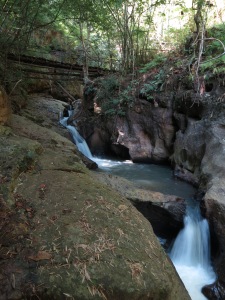 The lower part of Pembok waterfall, near Pai

And there’s Pai Canyon.  It’s not exactly the Grand Canyon, but it’s attractive nonetheless, and it was fun to spend an afternoon scrambling around climbing all over it. 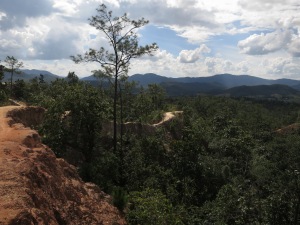 And when you’re done with that, there’s hot springs to relax in – including pools of up to 80 degrees Celsius (well, obviously you don’t relax in those).  And there’s the ever-popular game of ‘look at that idiot tourist being stupid on his scooter’ (winner:  the group of bronzed Aussie-looking boys riding out towards the hot springs in the rain, wearing nothing more than board shorts:  no helmet, no shoes, nothing but boardies) and its slightly older sibling ‘look at that idiot tourist sporting injuries obviously sustained on a scooter’ (winner:  the girl sporting road rash literally all down her right leg, more on the underside of her right arm, and a few bonus nicks on the right side of her face).

That was pretty much enough to keep us occupied for our time in Pai, really.  We took our time enjoying the ride back to Chiang Mai – and another coffee and lunch at We 2 Coffee – and hoped that the weather would hold out until we got back. 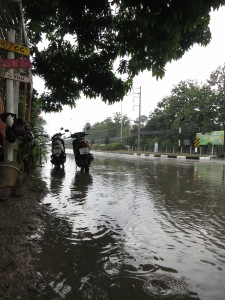 Our scooters, standing in an extended puddle of water otherwise known as the road, as we wait for the deluge to ease on our ride back from Pai to Chiang Mai