Speed signs in Vietnam. Good luck figuring that out as you scoot past at 70-odd kilometres an hour, riding on the verge, avoiding both potholes and other traffic! Personally, my favourite part of this particular sign is that a motorbike is apparently allowed to go 10km/h faster without a rider than with.

A light-hearted interlude from our regularly scheduled programming:  some of the more entertaining aspects of traffic in Vietnam… 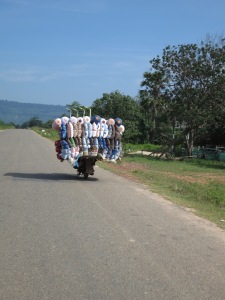 I’m cheating, because this picture is actually from Cambodia, but we saw similar in Vietnam. Underneath that massive pile of pillows and cushions somewhere is a scooter.