(Apologies for missing a post on my unofficial post-every-three-days-until-I-can-catch-up-to-my-present-location schedule:  I’m in Bolivia at the moment, and the internet is, well, less than ubiquitous.  Also, travelling and blogging is hard, dammit!  I know, I know, cry me a river, etc.)

After a busy day followed by an overnight train from Ninh Binh, we were happy to have a quiet day to ourselves to get some laundry done and rest up before exploring Hue.  Especially because we had two fairly epic days ahead of us…

(Note to the culture police.  Normally, I’m pretty good at making sure I spell things good and proper, using the correct bunch of letters and letteroids in the appropriate local language, etc.  Although I’ll admit I was pretty lazy with Hanoi, which I should have written Hà Nội.  On that note, Hue is actually spelt Huế.  Yup, that’s an interesting set of squiggles you’ve got there over the e.  If I remember rightly, the caret/circumflex makes it the short e sound – in Vietnamese, ê is a different letter than e – and the acute accent/diacritic is a tonal indicator.  Unfortunately, that shit’s kinda tricky to type, and I get bored of copying and pasting from the ever-reliable Wikipedia.  So we’re going to go with just naked ‘Hue’ – and similar bastardisations of other intricate Vietnamese names – accepting that my cruddy Vietnamese spelling will be perfectly on par with my cruddy Vietnamese pronunciation.) 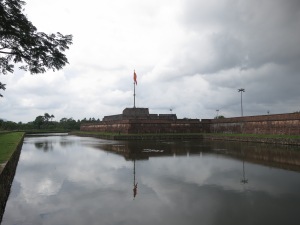 The walls, moat and flagpole of the ancient imperial city at Hue

The main tourist feature of Hue itself is the old citadel.  Hue was, for a long time, the capital of imperial Vietnam – right up until 1945, in fact, when (French colonial) imperial Vietnam became the (Frenchies-be-damned) Democratic Republic of Vietnam, with its capital in Hanoi.  And so Hue is the proud owner of a grand old walled Imperial Citadel, home of the Nguyen emperors and their courts.  I suppose it’s kind of like Vietnam’s version of Beijing’s Forbidden City, only a little more falling down, and a little more overgrown.

The falling-down-ness is somewhat charming, actually, and not so severe that it ruins the history of the place.  And of course it’s understandable, too, given that the citadel was at times a key focal point of the Vietnam War, in particular during the brutal Tet Offensive.

So it’s a bit of an understatement to claim that the site is imbued with history, and our time there was a morning well spent wandering through it, being transported back in time to a richer, and perhaps more splendid, Vietnam.

Ngo Mon Gate (the Noon Gate), in the ancient Imperial Citadel of Hue. This gate is where the last emperor of Vietnam abdicated in favour of Ho Chi Minh’s revolutionary government.

As the olden day home of the emperors, Hue is the centrepoint for their final resting places, as well.  And so after walking around the Imperial Citadel, we returned to our hotel to pick up a pair of scooters to explore the Tombs of the Emperors, situated outside the city in a variety of seemingly random locations.

By the lake at the Tomb of Emperor Tu Duc, near Hue

We visited three of the many tombs – picking the ones that seemed both convenient and interesting, and carefully planning out a route that would let us see what we wanted to see in the time we had that afternoon, before anything closed, and well before we’d run any danger of having to ride back in the dark (a possibility we most certainly did not relish, given Vietnamese traffic and general road quality).

We walked around the final home of Emperor Tu Duc, a large complex around a lake, and one which served as his resting place during his lifetime as well as in death.  We marvelled at the monuments to a handful of his 104 queens, wives and courtesans (really?!  at what point is 103 not enough?), and we appreciated the serenity of his lakeside summer house.

From there, we rode to the hillside monument to Emperor Khai Dinh, climbing up to his burial chamber, passing the stone mandarins (no, not the fruit) and elephants which line the entrance courtyard on the way up to the main temple. 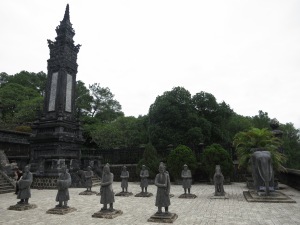 Statues of attendant mandarins, at the Tomb of Emperor Khai Dinh

And finally, we scooted out to the slightly more remote Tomb of Emperor Minh Mang – again a large complex, with several temples to progress through before you make it out back to the fenced-off hill in which the Emperor now reposes.

It was a nice conclusion to a day of elegant architecture and quiet, reflective surrounds.

At the Tomb of Emperor Minh Mang, near Hue

And thus, with that selection of tombs successfully visited, and with darkness due to fall in the not-too-distant future, it was time to return home.  The Minh Mang tomb is a bit of a distance from Hue itself, but we had Google Maps to guide us, so it shouldn’t be a problem following the main road along the river back towards town.

And it wouldn’t have been.  Except that at what so far as we can tell is the exact point at which we were farthest (as the crow flies) from our hotel, my scooter took objection to the bumpy road surface (let’s just say that as far as main roads go, it wasn’t exactly paved) and gurgled to a stop.  And refused to start again.

There was plenty of fuel in it – we hadn’t been that stupid.  But the sounds it was making were definitely “I’ve got no fuel” noises.  I walked the bike up the road a bit until we came to a petrol station under construction.  They helpfully directed us farther along the road, where we came to a little hut that also sold fuel.  With no Vietnamese whatsoever, I hand-motioned that we needed a screwdriver to get the side cover off so Chris could investigate further (not much of a mechanic, myself), to no avail.  We managed to get the damn thing off anyway (using the hotel key, if I remember rightly), only to find that there wasn’t anything obviously wrong.

With little other choice available to us, we left the bike by the side of the road, and committed the cardinal sin – two guys on the same scooter – to get back to the hotel.  Having first emailed the hotel a Google Maps link to the exact location of their scooter, and rung to explain that we were on our way back and had had to leave the enfeebled transport behind.  (Hooray for cheap local SIM cards!)

We got back to the hotel, at which point I was handed the keys to a working scooter and asked to lead the hotel owner and his mechanic friend back to the site.  It seemed that reading maps wasn’t their strong point, so my clever email was not enough, and my personal guidance was required.  Eventually we got there, at which point the mechanic fixed the bike by jumping up and down on the kickstarter for a good five minutes to eventually start it, and then holding the throttle open for another few minutes to clear out the dirty fuel line that everyone had by then assumed was the most likely cause of the problem.  And so, job done, we rode back.  In the dark.  Through Vietnamese traffic.  Enjoying Vietnamese road quality.

Anyway, I made it back with no further problems – just a little later than originally anticipated, and with slightly more experience riding in difficult Vietnamese conditions than I had expected to have accrued by this point in our travels.  We found ourselves some quick and easy food, and, given our plans for tomorrow, we agreed we should probably find an alternate scooter supplier first thing in the morning…