Our journey to Ninh Binh from Cat Ba involved a form of travel that was definitely new to me:  a sleeper bus.  We saw them a few times in Vietnam, but this was the only time we travelled on one.  Picture a normal coach, but instead of having normal seats, there are three columns of bunk beds running lengthwise down the bus.  Interesting.  It wasn’t that bad, but a little problematic for me specifically:  I’m a little bit taller than the Vietnamese design specifications anticipated, so sleeping was not a likely outcome.  Instead, I found myself spending the ride sitting cross-legged on an upper bunk in the middle of the bus, knees sticking out over each aisle, head just safely stooped beneath the roof.

We were only on the bus (which was actually going all the way to Saigon – about a 24h journey, if I remember rightly) for three hours, though, so that wasn’t an issue.  I whiled away the time chatting to the ever-smiling Swiss girl across the aisle from me, no doubt boring her to tears behind her charmingly friendly façade.  I think she agreed with my conclusion, though, that this was an entertaining form of transport, albeit not one to enjoy spending long periods of time on…

Once deposited in Ninh Binh, we had no trouble recognising the truth to what we’d read in guide books and online:  there’s really nothing interesting to the town at all.  We found our excellent hotel, and enjoyed a sleep in real beds that weren’t in the process of driving anywhere.

And then the next day, it was time for our first big scooter adventure.  We’d already done a circuit of Cat Ba Island on scooters, true, but that was just for the sake of riding around to have a look about, and not so much as a definite means of transportation anywhere specific.  Ninh Binh, though, we were in because there’s some cool stuff nearby.  –ish.  And scootering ourselves around sounded like a better way to get there than being chauffeured around on a tour. 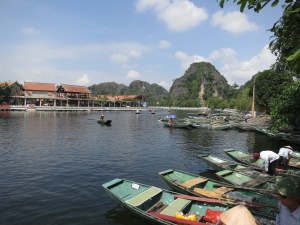 Boats on the Ngô Đồng River, waiting to row tourists out to Tam Cốc

Our first destination for the day was the Ngô Đồng River, to see Tam Cốc (an attraction whose name literally means ‘three caves’).  Having parked our scooters and handed over ten or twenty thousand of our dongs to a nearby parking attendant (this is necessary throughout Vietnam – otherwise chances are pretty good that someone, quite possibly said parking attendant, will come and steal, say, a mirror, from the scooter and then, on your return, attempt to sell it back to you, claiming that they retrieved it from someone else whom they saw steal it with their very own eyes and whom they subsequently athletically and heroically chased down out of sheer outrage at the thievery), we bought our tickets and approached the boats, seeking one without a box full of trinkets and souvenirs that the boat’s rower would inevitably spend much of the trip trying to offload onto us.  This took some time, but we got one, and proceeded up river.

When offered paddles, we accepted, and totally didn’t spend the first five or ten minutes seeing how quickly we could overtake the few other boats on the water.  (We’d arrived early, before the massive tourist rush, so there weren’t actually all that many others to overtake.)  We drew a few amused looks from other boats for the fact that we paddled the whole time, rather than downing tools in favour of our boatmaster after the requisite two minutes of the novelty wearing off.  But then, like the other tourists, we were casting a fair few interested looks around ourselves, watching in amusement at the way the professionals up the back of the boat would normally lay back lazily and row with their feet.

Tam Cốc is misleadingly named:  the attraction is not particularly the caves (which are actually natural tunnels that you row through), but the general scenery of the area, which is sometimes described as an inland version of Halong Bay.  The limestone karsts here are just like we saw at Cat Ba, only surrounded by rice paddies, not sea.

On a rowboat on the Ngo Dong River, rowing through Tam Coc (‘three caves’), out amongst limestone karst towers and rice paddies, near Ninh Binh, in north Vietnam

Such is the landscape all around Ninh Binh, as we could appreciate from the apex of our second destination for the day.  Having tipped our rower (you can produce surprisingly large grins on faces in rural Vietnam with surprisingly small amounts of money, it turns out – the local currency equivalent of not much more than one US dollar produced a healthy beam from ear to ear as we thanked our guide for not trying to sell us tat throughout our ride) and retrieved our unmolested scooters, we proceeded to our second destination, the Bích Động pagoda complex.  There are three pagodas in the complex, one at ground level, and two further up inside and on one of the limestone karsts.  As we ascended, we did little more than glance at the pagodas, in all honesty:  they’re lovely, and it’s certainly impressive that they date from 1428, but, no doubt owing to my utter lack of appreciate for the finer points of culture, we were there for the view.

The view across the rice paddies and among the limestone karst towers from the top of one of those towers, above Bích Động Pagoda

It was a spectacular view, which we had plenty of time to appreciate as we waited for copious amounts of sweat to dry off after having clambered up over the sharp edges of the limestone karst tower atop the pagodas.

It was a view that we saw again from our third destination, above Hang Mua (Mua Cave – I say “above” the cave because the cave itself has no redeeming features whatsoever, and the place is only interesting for the climb up the hill).  Thankfully, in the meantime we’d spent some time riding around aimlessly on our scooters, following some of the roads we’d traced out from above the pagoda, appreciating the scooter equivalent of air conditioning as we surveyed the area and blasted ourselves through the air to dry off.  So after the climb to the top of the hill above Hang Mua, we could be content in the knowledge that it was completely fresh sweat that we were now dripping onto the ground.  But again, the view made the effort and the ridiculously frequent necessity for rehydration worthwhile.  From here, we could see the rice paddies stretching right out to the edges of Ninh Binh town, in a stunning panorama that in many ways sums up this part of Vietnam.  In a nice touch, we could also see back to the Ngô Đồng River and Tam Cốc, where we’d started the day’s exploration of the area.

The view across the flooded rice paddies and limestone karst towers towards Ninh Binh, as seen from the top of the climb above Hang Mua

Also at the top of the karst above Hang Mua, a giant dragon statue

Our final stop for the day was Hoa Lu – an ancient citadel which I gather was of quite some import in Vietnamese history.  Again, though, uncultured scenery whore that I am, we proceeded to ignore the ancient temples and climb the nearest karsts for the view.  But not until we were soaked.  A momentary downpour just after we arrived had us seeking shelter by squatting under a low rocky overhang:  we felt very Vietnamese.  Once that passed, and once we’d thoroughly explored going completely the wrong way to find the track we were looking to climb up, we enjoyed another ascent up a now-quite-wet-and-slippery collection of rocky crags, and another view from on high – albeit that this one was slightly less photogenic, unfortunately, due to the foreboding clouds which promised good things for our ride back home.

And speaking of our ride back home, we returned uneventfully to our hotel (did I mention they were excellent, by the way?), and took full advantage of the fact that they had kindly offered to give us a late checkout.  “Late” as in 9pm, when our train left.  So we returned to our room and showered, before wandering around town multiple times looking for something to eat before settling on a streetside stall which looked more promising than the rest.  Our ordering procedure basically consisted of sitting there and looking confused until our server arrived at our table and half-asked, half-announced “chicken soup”.  And so we heartily enjoyed the chicken soup.  Not full, however, I returned and engaged my back-up ordering procedure:  pointing indelicately to another customer’s meal and holding up two fingers to ask for two of whatever the hell that is, please.  Thus satisfied (our second dish was a delicious incarnation of some sort of pork wanton and noodle broth;  we opted to have it without the optional fried chicken feet accompaniment on this occasion), we returned to our hotel to take advantage of their promised transfer to the train station.  Which is how we found ourselves each fully backpacked-up and loaded onto the back of a scooter driven by our friendly hotel staff around the block to meet our railbound accommodation for the night, as we made our way down to Hue for our next adventure.