For many travellers, an arrival in Saigon is somewhat overwhelming.  Often it’s the first experience of the chaos of a large Asian metropolis, and for many people it’s the most ‘different’ place they’ve been, if that makes any sense.

Our initial experiences of Saigon were somewhat more subdued.  Whatever microscopic evil he’d managed to get into his guts in Hoi An had made Chris’s train journey down not a lot of fun, and once we’d arrived and settled in, the, err, indisposition, meant that he still wasn’t often venturing great distances from the hotel, err, facilities.  I wandered around a little more, but even after Chris recovered a bit, we didn’t spend much time exploring the city, beyond making our way to the typical sites such as the Notre Dame Cathedral, the Central Post Office, the War Remnants Museum and the Reunification Palace (née Presidential Palace).

Me in front of a replica of Tank 843, the tank which rammed through the gates of the Presidential Palace (now the Revolutionary Palace), signifying the North’s taking of Saigon (now Ho Chi Minh City)

Of those, the War Remnants Museum is worth a specific mention.  In addition to housing a collection of military hardware that the North proudly acquired when the Americans abandoned Vietnam and all their toys therein, it also features a large and confronting display of the effects of the US’s use of chemical warfare during the war.  Specifically, it’s a graphic documentation of the short- and long-term effects of Agent Orange and its relatives.  There are pictures of deformed infants, children, and adults.  There are letters from survivors.  There are comprehensive descriptions and statistics detailing the tragic stories that began in the 1970s and haven’t yet ended, and won’t for generations.  There’s a surprisingly meticulous display dedicated to the journalists who died covering the war on the ground, too – especially those who covered the aftermath of various US atrocities.

My criticism of most of Vietnam’s museums is that they’re too ridiculously one-sided – to the point of fictitious – and propagandist.  This museum doesn’t suffer from that.  Perhaps it’s just not necessary.  Perhaps it’s that for this particular topic there just isn’t more than one side to look at:  there’s a reason that mass bombing campaigns featuring highly toxic chemicals on civilian populations are an unequivocal and egregious violation of international law and general norms of human conduct.  Regardless, it’s a transfixingly gripping museum, and I saw more than one person inside having difficulty coming to grips with the subject matter.

But despite our appreciation of that museum, our main goal for Ho Chi Minh City actually had nothing to do with anything in the city itself at all.  This was our last stop in Vietnam, and it was time for one last scooter adventure:  the Mekong Delta.

By this stage, having already enjoyed several weeks in Vietnam, we were fast realising that our two months in South-East Asia were going to whip by very quickly.  So we didn’t have nearly as long to explore the Mekong Delta as we wanted.  We would have liked to embark on a three or four day tour, exploring farther in than the typical tourist itinerary allows.  But that would have required sacrifices in our future itinerary that we just weren’t sure we could make.  So we only had a day.  Better make the most of it…

Again, we started early in the morning, planning a big day ahead.  We’d arranged scooter hire from our hotel – but unfortunately, in that respect, the day didn’t start well.  When we turned up in the morning to collect the bikes, there was actually only one of them there, plus another mystery bike on offer – one that appeared fifteen minutes later, described as the hotel owner’s personal scooter (as though it was very generous of his employee to arrange for us to be able to use it, despite our having confirmed with said employee the night before that there would be two hire bikes available).   It looked like it might have come from a display at the War Remnants Museum, and more problematically, it had no working front brake.  (“But the back brake is fine!  It’ll be no problem!”  “Umm, no.  Goodbye.”)  So, having wasted half an hour on that, we took another thirty minutes to find a more reasonable scooter place, and set off an hour behind schedule already.  Still, we set off on pretty decent bikes, so all was not lost.

You’d think that by now we would have learned to estimate how long we’d take to make our way around Vietnamese roads, but apparently you’d be mistaken.  We had a rough route planned in our minds (and on our smartphones), but when we got to the first stop, at My Tho, we realised that perhaps our estimates had been a little optimistic.  We abandoned our plans of getting in as far as Can Tho, and took a simpler, shorter route, focussing more on riding down whatever road looked interesting at the time than on trying to make it to any particular destination.  After all, the back roads are always more fun (and generally prettier) anyway. 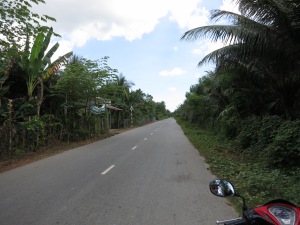 Scootering into the Mekong Delta from Ho Chi Minh City

I can’t really tell you exactly where we went, because we weren’t necessarily paying desperately close attention to where we were on the map.  We’d have Google tell us where we were, then we’d pick a vague direction to head off in on a whim – whatever looked like it might be a nice road to ride down, towards some small local village, or some random ferry crossing or bridge that might afford us some decent views of the Mekong Delta.  We were in experimentation mode, basically, and just enjoying ourselves.

A river channel in the Mekong Delta

We passed flooded rice paddies being tended by hunched over workers in pointy conical hats;  we crossed bridge after bridge over the various spreading tendrils of the Mekong River;  we saw small local markets;  we took a ferry crossing over a larger part of the river;  we stopped for Vietnamese coffee whenever the opportunity presented itself and we felt like a break.  We shared in the amusement of locals as they grinned and pointed at the silly foreign devils (especially at the ferry crossing), presumably wondering what the hell we could be doing out here.  It was a somewhat whimsical day, in all.

And then, in no time at all, as we were still enjoying our largely aimless exploration, it was time to head for home:  we made a more conservative stab at estimating the return time.  So we looped around and headed back, right towards those inviting grey-black clouds.

And then it poured.  For a good forty minutes or hour, or thereabouts.  Of course, we weren’t really in a position to slow down much – let alone to wait out the rain.  We had to have the bikes back by 7pm, because the shop closed at 7.30 and wouldn’t reopen in the morning until after we were already on a bus to Cambodia.  So we persisted, soaked to the bone, and giggling all the way.  We loved it.

And we made it, too.  We handed back the bikes at 7.10pm, faces beaming with stupid, satisfied “see, I told you I’d make it” grins.  It hadn’t been the lengthy Mekong trip we’d originally hoped for, but it had been fun, and an appropriate send-off for Vietnam.  We rested up for a long bus trip tomorrow – into and right across Cambodia.  We’d be off to Siem Reap for our next historical sight-seeing extravaganza:  the incredible historic Khmer city of Angkor.  We were too tired to be properly excited, but there was definitely a nugget of anticipation there.  And rightly so, because it was going to be amazing.