Arriving in Kathmandu was the beginning of perhaps the most anticipated part of our round-the-world trip:  the start of a 22-day stay in Nepal to go trekking in the Himalayas, up to Everest Base Camp and back.

Before flying up to the mountains, we had two days in Kathmandu to see some of the city, to meet our tour organiser Kumar, guide Jay Ram and porter Lal, and to rent and buy whatever extra gear we’d need on our trek.  That extra gear was substantial, by the way:  buggered if I was going to carry a down jacket, down sleeping bag, full set of thermals, waterproof trousers, thick gloves, etc., around in my backpack as we chase summer around the world, just so that I’d have them in Nepal.  (I totally didn’t need the down jacket, either, just by the way.  Jay Ram made me hire one, but I would have been totally fine without it.  Why wouldn’t you believe, me, Jay Ram?  Why?!  I’m a big boy, I should be allowed to make my own decisions, dammit!  And I was totally right and Jay Ram was totally wrong.  So there.  Nyah.  Ahem, moving on…)  So a decent chunk of those first two days was shopping.  Thankfully, that shopping was easy and cheap.  It turns out, would you believe, that there are a remarkably large number of shops selling remarkably cheap gear with The North Face logos plastered haphazardly all over.  It’s almost like they’re not all entirely legit.    (The funniest ones are the shops with gear where you can pick the gear you want and then pick which of their stock of brand-name labels you want sewn onto it.  “Get yer genuine <insert brand name label> gear here!”)

But while there’s tonnes of counterfeit crap everywhere, and that’s just an accepted part of shopping in Kathmandu, there are a couple of decent places around.  Based on some prior internet research Chris had done, we headed to a place called Shona’s, and after chatting and joking a while with the owners, we grabbed all our stuff there.  They had about as much fake stuff as everywhere else, but at they’d tell you what was genuine and what wasn’t, and they gave us good advice – including what stuff we needed to be good, and what stuff we could get away with going with crappy knock-offs for.  For anyone else heading through Kathmandu and needing to grab gear, the GPS in my camera tells me that Shona’s is located at 27°42’49.8”N, 85°18’44.4”E.  The storefront looks like this: 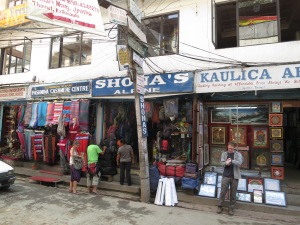 But our time in Kathmandu wasn’t all bargain hunting.  We did get to observe the chaos of the city, with its more-pothole-than-road mainly-dirt thoroughfares, its electricity network that looks remarkably like it was wired by either monkeys or spiders (or quite possibly by a troop of monkeys who were simultaneously fighting a complex rearguard action in defence against a swarm of spiders), and its beautiful temples and pagodas.

A regular traffic intersection in Kathmandu. The word you’re looking for is ‘clusterfuck’. Added bonus: local dude nonchalantly picking his nose in the foreground.

The streets of Thamel at night – chaotic wiring above, chaotic traffic below

Mostly, though, our first two days in Kathmandu were spent holding our breath, hoping that the weather would be OK for our flight up to Tenzing-Hillary Airport, Lukla, to start our trek.  Oh, and there may have been a bit of a mad rush to pack and repack our bags to take up only what we thought we’d need in the mountains (and, y’know, to try not to overburden our porter with ridiculous amounts of unnecessary crap – only moderate amounts of unnecessary crap in these bags, thanks very much!).  We were finally done packing and made it to bed at 1am.  You’d think we’d be better at travel preparations than that by now, but apparently you’d be wrong.

Anyway, breath held, fingers crossed, prayer wheels rotating, we waited to see if the weather gods would smile on us in the morning.