The lady at the tourist information centre in Queen Alia International Airport in Amman was horrified:  yes, Petra was definitely the premier tourist attraction, but how could we come to Jordan and not also see the many other wonders the country has to offer?  Well, fairly easily, it turned out:  I’m sure the rest of Jordan is great, but a round-the-world ticket has time constraints, and sacrifices have to be made.

Regardless, though, Petra is most of the way down the south of the country, and Amman is up towards the north, and to make the most of our time, we’d hired a car to get between them.  And so on the way back, since we were in the vicinity anyway, there was time for us to fit in one other cheesy Kodak moment:  floating in the Dead Sea.

Our chosen portion of the Dead Sea

Paddling in brine is apparently quite the money-extractor in Jordan:  there are really quite a number of surprisingly expensive private beaches on the eastern shores of the world’s premier saline attraction.  (And I have no reason to expect that the western shores, in Israel, would be any different.)  That didn’t really seem like our style, though, since their pitch seemed largely limited to the fact that they had fresh water showers to clean yourself off in afterwards.  A welcome benefit, most definitely, but not one worth paying through the newly salt-encrusted nose for.  So with several bottles of tap water prepared as our makeshift showers, we just drove around a bit until we figured we’d found a nice stretch of waterfront that seemed pretty and available.  In fact, it turned out that we’d picked the perfect spot:  other than intermittent highway traffic in the distance, there was no one for miles, and we spent a good hour dicking about with, so far as we could see, the whole sea and shore to ourselves.  (For anyone who’s interested, my camera’s GPS tells me that we were at 31°27’20” N, 35°33’59″E.  Feel free to steal our spot.)

The typical tourist shot of the Dead Sea is supposed to be lying on your back, reading a book or a newspaper.  So Chris ventured out into the water pretending to be able to read his Arabic broadsheet, and I demonstrated my advanced skills with technology by paddling about with my Kindle. 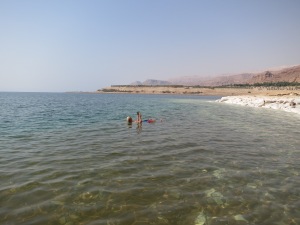 Reading my Kindle while floating in the Dead Sea

Once done with the mandatory Kodak moments, we made a few discoveries about swimming in the Dead Sea.  First, swimming breaststroke is remarkably difficult:  keeping your legs below the water is a constant struggle, and you’re always rolling unintentionally over onto your back as you lose your balance.  Backstroke requires quite some shoulder flexibility to get the arms down far enough, and freestyle is, well, strange.  At last, an appropriate location for doggy paddling.  Second, highly concentrated (saturated, in fact) saline is incredibly slimy, and makes for a very weird sensation on the skin – a very foreign, greasy, stinging mess that won’t go away, basically.  Third, the salt is so concentrated that getting any in the eyes is incredibly painful, and the pain lasts for a surprisingly long time.  Woe betide anyone who reacts to the pain by reflexively trying to wipe your eyes with hands wet with the salt water.  That’s a mistake you won’t make twice.  (Ok, fine, it’s a mistake I made twice.  But fool me thrice, shame on… something something.)  Fourth, the Dead Sea is an excellent way to discover (and sterilise) all those tiny little cuts and skin abrasions you didn’t know you had.  Fifth, be careful when you fart.  Yes, the bubbles coming out of your butt are just as funny in the Dead Sea as they are anywhere else in the world.  But be careful not to let any water back up the pipes when you’re done, or you’ll be in for a most unwelcome stinging sensation.  You have been warned.