I really want to write a post about Zagreb that properly captures how much I love the city, but I have absolutely no idea how.  We didn’t do anything spectacularly newsworthy there.  We got my camera replaced (thank you so, so much to the wonderful people at Photo Centar for being considerably more helpful than Canon themselves in sorting out the manufacturing defect with my S100).  We went to the zoo and admired the cuteness of the marmosets and red pandas.  We went to the botanical gardens (in which I spent most of my time playing with macro mode on said newly-replaced S100).  We went to the movies.  And we enjoyed some good food and the microbrews of a couple of good pubs.

We spent our time with a dear and entertaining friend of mine as she showed us around her home town – me for the second time (thanks again, Laura!).  So I can’t even spout many words about the typical tourist trip to Croatia’s capital.

We visited the Museum of Broken Relationships, which I suppose is blogworthy.  It’s a collection of momentos with accompanying pithy explanatory remarks, each exemplifying a contributor’s failed (or otherwise terminated) relationship.  It’s a small but thought-provoking set of exhibits, ranging from the funny, through the sad, and occasionally to the frankly bizarre and slightly disturbing.  Such as the axe which a contributor used to hack to pieces all the furniture of her jilted girlfriend, because it apparently wasn’t collected sufficiently quickly after the relationship went sour.  Definitely different, and worth a visit.  And it sells ‘bad memory erasers’ in its gift shop.  So how could you go wrong? 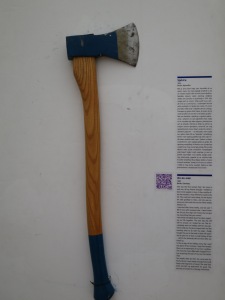 Axe of a crazy woman

Zagreb does have a few icons which we happily snapped – its cathedral, and the mosaic-tile roof of St Mark’s Church, for example.  And it has a to-scale model of the solar system spread around its city streets – an entertaining diversion to track down, at least until you get past Mars and realise that Jupiter is a couple of kilometres away.  (Now I know how Voyager felt.  “Seriously?  Whose idea was this asteroid belt shit anyway?!”)  And its Technical Museum is surprisingly cool – including its (at the time) current temporary display of historical fire-fighting equipment, and its more permanent displays of various other random pitstops on the path to technical advancement.  In particular, it’s hard not to enjoy one of their regular demonstrations of Nikola Tesla’s more interesting playthings.  (The Croats do love their Nikola Tesla.  The Serbs love theirs, too.  I’m waiting with bated breath to get to the US next year and hear just how great their Nikola Tesla was.)

But compared to many of the other places I’m visiting, I suppose Zagreb does fall short in the tourist attraction department.

But maybe that’s part of what I like about it.  There’s a relaxed and comfortable feel to Zagreb.  It’s an easy place to sit around and enjoy life.  It’s not in a hurry, it’s open and friendly, and it’s easy to get around.  (The tram system is convenient and extensive – a combination of modern and old, boxy, vaguely Soviet-looking trams roaming all the major streets around town.  And if you ask the locals, half of them will tell you it’s free, too:  fare evasion is the accepted norm, in protest at high prices and corrupt management, I’m told.)  It’s not a big city, though, and there’s not many places you need go.  Find yourself a good spot on Ulica Tkalčića (Tkalčića St) – the main pub and café strip – and watch the evening go by, and I hope you’ll see what I like about it. 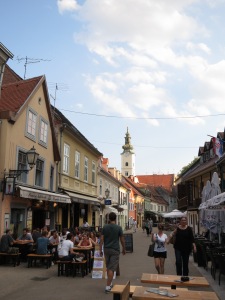 Zagreb is not the most exciting city, but it’s definitely one of my favourites.  A city to live in, not to visit – even if you’re only there for a couple of days.