My trip to Rome felt a lot like those late night cricket highlights packages they broadcast for those who want more than just the two minutes they’ll see on the news, but don’t have the time or patience to sit and watch a whole day.  Our train got in on Friday evening, leaving us enough time for a decent pizza but not much else, and by midday on Monday we were back at the train station again, bound for Ancona to catch a ferry that night for Split.

So I had a Saturday, a Sunday, and a checklist of Rome’s greatest hits.  Basically, that covered the Vatican City, plus enough of the falling (or fallen) down bits that I felt I could justifiably claim to have done my high school Latin teacher proud. 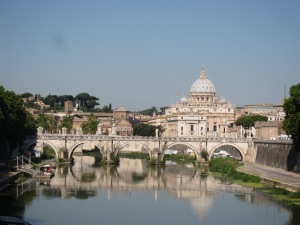 On the way to the Vatican City: a bridge over the River Tiber, with the dome of St Peter’s in the background

Strolling through the Vatican Museum on Saturday morning was for the most part an exercise in the appreciation of scale.  The museum is not physically huge, but it’s certainly full.  The sheer quantity of stuff is quite something.  After a while, I have to concede that one ancient Roman statue (minus arms and one leg) starts to look very like another (minus head and genitals) – especially when they all seem to have had their midsections modelled on the same one guy, who apparently spent his entire life alternating between (a) functioning as some kind of Roman equivalent to a Calvin Klein model, and (b) lifting heavy things (and putting them down™) using nothing but his obliques.  (In fact, it seems reasonably appropriate that one of the more famous statues in the collection is the Belvedere Torso, which is headless, legless and armless.  Also dickless.)

The statues, paintings and tapestries left a strong (and carefully cultivated) impression of the Catholic Church as a custodian of the history of Western civilisation.  Although religious iconography is not really my thing, so once I’d passed through the (many many) halls of Greek and Roman statues, I picked up the pace a little past the no-doubt-fascinating-to-plenty-of-people-who-aren’t-me rugs and painted things.

Of course, no matter how much interest you don’t have in carefully arranged pigments, the Sistine Chapel is going to be the focus of any trip to the Vatican Museum.  It didn’t disappoint, but it wasn’t quite what I expected, either.  (Probably because I read its Wikipedia page a couple of minutes ago, writing this post, rather than, say, before I visited the Vatican.)  For starters, it’s a plain rectangular hall, not the ornately furnished cross-shaped layout that my brain has associated with ‘proper’ chapels ever since I went to school (an Anglican one, admittedly, so not a massively logical association on my brain’s part, but whatever).  Wikipedia tells me its ceiling is barrel vaulted, but if you’d asked me ten minutes ago, I would have sworn it was flat – it’s certainly not the grandiose arch of a ceiling that I’d envisaged in my head either.  And the most famous part of the ceiling – the finger of God reaching out to touch the similarly extended digit of Adam – is, well, smaller than expected.  Less of a focal point, more of a nice touch that happens to be on the panel that happens to be in the middle.

But still, the Chapel deserves its fame (no doubt Michelangelo will be relieved to know I approve).  It’s tricky to get a full sense of its holiness and serenity when sardined in with several thousand others, many of whom are spending their time seeing how many photos they can take before a guard comes over to remind them that it’s bad manners to be taking happy snaps of Jesus when he already asked you not to at least forty times.  And that goes for photos of Jesus’ friends, too.  (Seriously, though, are any of those photos going to look good anyway?  The girl taking forbidden shots with her iPad not only wasn’t nearly as surreptitious as she thought – it’s an iPad, for fuck’s sake, it’s enormous – but I’m also guessing her photos would have turned out better if she’d bought a postcard, taken it outside where there’s some light, and taken a photo of that.  Although it would have been harder to get her dad in that, I suppose.  Meaning your family photo album would be missing that key “and here’s us violating the sacredness of one of the most important places of worship in all of Catholicism” shot.  So there’s that.)  Nonetheless, the holiness and serenity are still appreciable, despite the presence of the plebeian masses in the temple, and so the effect Michelangelo was after works out after all.

The famed ceiling of the Sistine Chapel (centre), from the side you’re allowed to take photos of: less impressive than you expected, no? It’s pretty good from the inside, though.

After the museum, it was back out into Italy to go round the corner and back into the world’s smallest state from a different side to see St Peter’s Basilica.  The Basilica is most impressive, inside and out.  Quite stunning.  At the risk of unintentionally involving myself in a dogmatic rift of faith in which I have no interest, I think I prefer it to St Paul’s in London, at least as far as its insides go.  (St Paul’s wins the iconic landmark competition, though, as far as I’m concerned.)  Anyway, I won’t go into any detail describing it, but I will mention that it’s worth your while doing the stair climb right to the top of the cupola for a great view over the Vatican and all of Rome.

The main altar of St Peter’s Basilica, complete with dusty rays of light and all-seeing eye of Sauron

View from the outside of the dome of St Peter’s Basilica, looking out over St Peter’s square and into Rome

I’ll spare you a recital of the minutiae of every last site I saw in the rest of my time in Rome, but the remainder of the highlight reel basically included: 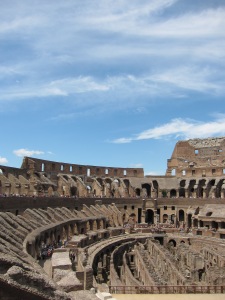 The Colosseum. Looks pretty good from the inside, too, no?

All up, it made for a busy couple of days in the capital of the ancient (Western) world.  I’m sure at some point I’ll be back to see what the city’s like when not running around like a headless chook with a camera.  (And maybe even by then I’ll have my own camera back, if Canon can ever tell me what cunning plan they have for fixing the manufacturing defect in my otherwise excellent S100.  [Late posting note:  this got sorted in Zagreb, so you can all stop worrying your pretty little heads.]  Thanks to Chris for letting me borrow his S90 for said running around – all the photos in the post are by me, but with his camera.)  But in the meantime, job done! 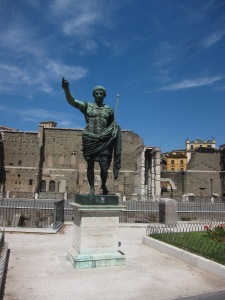 2 thoughts on “Rome – the highlights”