I’ve probably spent more time preparing this post than any other of the admittedly not very many at all on this blog, and yet it’s going to be a short (-ish) and uninformative one.  And it turns out that all my preparations have been in vain anyway.  All that time was spent trying to figure out just what the hell was going on with all the other tourists at Pamukkale – primarily the Russian ones – but to no avail.  The internet has failed me, and with this post, I in turn fail the internet.  My Google-fu is apparently too weak.

Pamukkale, for those not acquainted with it, is the location of a series of thermal hot springs in Turkey, and the distinguishing feature of these hot springs is their high mineral – especially calcium – content.  As the water from the hot springs emerges and streams away (or, given the Turkish heat, evaporates), it leaves behind its mineral content, and so produces travertine – pretty-looking white stuff which in the case of Pamukkale is laid down in pools on the hillside, made all the more attractive by the blue tinge to the mineral-heavy water they hold.

So far, so much Wikipedia-like goodness.  Where it gets weird is that it’s apparently not sufficient to come and take photos of the natural beauty.  Especially if you’re a Russian tourist.  I’d noted with interest as we wandered through the beginnings of the site that all the signs seemed to be in Turkish and Russian, unlike everywhere else I’d been in Turkey, where English features and Russian doesn’t.  Walking through the main section of the site, we saw why:  Russians made up the majority of attendees, and pretty much all of them were on one or other side of a fancy camera lens, taking studio-style shots of girls in skimpy clothes draping themselves over the travertine. 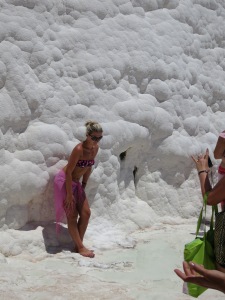 “This shot will fit perfectly into my ‘pictures of me in a bikini on natural wonders of the world’ album.”

There were come-hither looks, there were cleavage thrusts, there were girls in 1970s-style swimsuits displaying an apparent lust for deposits of calcium carbonate which, to be honest, struck me as downright unhealthy.

And then there were the rich Russian guys in budgie smugglers doing the same.  (One presumes they were rich, based on the very low and very high levels of attractiveness of themselves and their girlfriends, respectively, and based further on the quantity of their jewellery, etc, etc.)

I’ve heard a rumour since that there’s a Russian music video that was filmed at Pamukkale, and that the Russian tourists are imitating its starlets.  I’ve heard elsewhere that it was a photo shoot in a popular magazine.  But it’s here that my Google-fu has failed me.  No combination of Pamukkale and anything MTV, music video, or magazine shoots has brought me any joy.  And so it’s the artificial wonder of Pamukkale that’s left the deepest impression on me, not the natural one.

Remains of a tomb in Hierapolis (only partially baseball-batted).